Louisiana is a place under constant threat of hurricanes and flooding. Hannah Modigh’s lyrical photographic series Hurricane Season captures profound human sentiments in the midst of inhuman suffering. Modigh’s images radiate threats of death and destruction combined with a powerful feeling of living in the moment. Today the exhibition has its premiere at Fotografiska.

They are seated at a table full of papers. Three men. Their bodies covered by tattoos. In a room full of symbols. Symbols of the Ku Klux Klan. In an atmosphere of relaxed anticipation and a pervading sense of menace. A feeling that imbues Hannah Modigh’s ethereal series Hurricane Season which is the result of having shared the lives of the people of the hurricane-battered and poverty-stricken Louisiana, where people face the same threat but seeming never side by side – always segregated, divided into we/them, depending on the colour of their skin. The poverty, however, they share. And an over- whelming majority of prisoners (who are often incarcerated in penitentiaries run by the private sector) are black. History repeats itself, as unfree black people work the cotton fields under the roasting sun …

“It all began because I wanted to explore a macho culture that I believed existed in the area. I was struck by how segregated it still is. Because the groups are so removed from each other, this destructive us-against-them system is entrenched. I am attracted by nature and skin, which have been abandoned, which have been left behind. Nature and skin that are exposed and the connection between them. I’m very interested in how our surroundings affect us. Where we feel at home. And I often use many images in order to create a sense of being stuck in a repetition of emotions. It’s like a loop and it’s dif cult to break free from your background,” Hannah Modigh explains.

That she presents the KKK sympathizers seated at a table on “a normal day at the office “, instead of opting for the traditional imagery of people in hoods and burning crosses, creates an even stronger impression. The systemic need to belong, to be part of a clan, to have a place to go to, regardless of the aim of the activities.

“I try to find the everydayness in the most intense environments. Common- place situations with an awareness of death. Then I look for body language and attach importance to how people carry and move their bodies. It says a lot about a person, where you are and about your history. To me it’s important to use my art to interpret situations rather than documenting or judging them. I present my interpretation to the viewer and trust that the images will initiate a process in them, because I’m not trying to impose an agenda. Whatever the photograph may say is up to the viewer.”

This is the first solo exhibition of Modigh at Fotografiska, a delighted Pauline Benthede, Exhibition Manager, explains.

“We have followed Hannah Modigh’s exciting development for a long time and she participated in our 2015 Autumn Salon as one the juror’s choices, with works from various series. That we now present Hurricane Season is a natural consequence of the fact that Modigh, with her unique photographic idiom, has established herself as of the most interesting contemporary photographers. If there was only one camera left in the world, Göran Segeholm, our head teacher at Fotografiska Academy, would place it in the hands of Modigh, which tells all you need to know …”

This is the third time multiple award-winning photographer, Hannah Modigh, has explored a place in America with tough living conditions and created heartbreakingly beautiful photography, which, filtered through her poetic mind, turn into lyrical contemplations of how life turns out when the veneer of civilization wears thin.

When death is omnipresent, life is often lived in the fast and dangerous lane, and fate is tempted. Life can feel much more tangible and powerful when under threat, and when one lives in the moment the result is often a relaxed kind of joy. Thus it may not be strange that, on a hot summer’s day, one turns one’s car into a pool, because who knows, in two months time the car maybe crushed under a fallen tree. The images also contain a flourish of cultural expressions, such as the special Cajun cuisine with its seafood and legendary blues music.

“This attitude partly explains why I find it easy to approach people outside my usual context with its expectations on who I am and how I should behave. When I encounter strangers I also encounter new sides of my personality, and this is important to my photography. I don’t normally make any plans. I move randomly from place to place and allow myself to be guided in different directions by following what’s going on around me, through my encounters with the people.”

In 2010, Modigh won the Swedish Photo Book Award for Hillbilly Heroin and now Bokförlaget Max Ström has published the book version of Hurricane Season which will be released in conjunction with the opening of the exhibition. Modigh takes us to places where people deal with fear by transforming it into anger, combined with a happy-go-lucky kind of attitude.

“There is a subtle language here where things occur under the surface. There is an underlying tension, which is about to explode, or a feeling of being trapped under a glass dome. Not giving voice to one’s pain, but swallowing it. This is often what I portray. A silence, the energy of waiting. A condition that is very much about a person’s interior world. Questions which may have no answers, rather than answers which may have no questions.”

Working extremely intuitively with the atmosphere of the place vibrating in her body, her beautiful photography evokes a reality which is like being in the eye of the hurricane. The quotidian activities transmit the message that you cannot trust anything – nothing lasts.

Because, at any moment, things may blow up, by violence, by disaster. A punch on the jaw, delivered by Mother Nature in the form of yet another hurricane followed by flooding in the style of Katrina or an explosion between her children who live segregated with the threat of natural violence, in combination with wide-spread poverty and alienation. Because in the middle of the devastation after the disaster, you are lonelier than during the minutes that preceded it, attempting to patch up that which has been broken. A broken heart caused by the death of a dear one in the chaos, or just the ragged hopelessness of having to start all over again, knowing that there will be another hurricane season, which may demolish everything in its path.

The exhibition opens at Fotografiska on 10th of June in conjunction with the release of the eponymous book published by publishing house Max Ström. 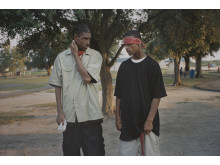 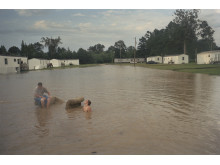 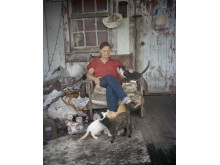 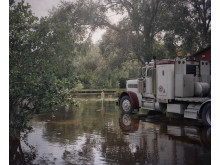 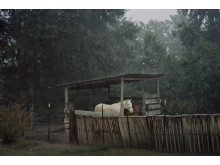