Fotografiska proudly presents photography from a lost world, where creativity and intuition was God, instead of Mammon. An era where the musicians, and the photographer Anton Corbijn, took themselves and each other to constantly new levels of expressing true passion for their art.

The exhibition 1-2-3-4 at Fotografiska is a celebration of Anton Corbijn’s work in the musicworld, a journey that started a good 40 years ago. It presents a relationship between portrait photography and music in a passionate creative process that basically no longer exists. With mutual respect for each other’s artistic expression, Anton Corbijn’s photographs shaped the images of the musicians he worked with, while he himself became world-famous for his extraordinary way of capturing that world. To portray it the way Corbijn did is rare in our days. Magazines have gone from very personal pictures, to flawless staged ones. They want to play it safe – and Anton Corbijn’s photography is anything but safe; it’s daring and passionate, from a man with photography as his biggest love.

–This is a celebration both of a world of musicians and photography that no longer exists. All presented in the big catalogue 1-2-3-4 to go with this exhibition with the same name. I am so happy that I was able to work in this very intuitive personal way, sometimes having an idea, often not, whilst doing my job for magazines. I was not focusing on what could be sold to others. Today I blame magazines for asking photographers to take safe and impersonal pictures. And because of the massive competition, photographers are keeping it nice and safe so they can sell all over the world.

So many people all over the world can relate to the bands and musicians represented in 1-2-3-4. The Rolling Stones, Courtney Love, Nirvana, Johnny Cash, Siouxsie Sioux, Metallica, Kate Bush, Joni Mitchell, Kim Wilde, Nick Cave, Bruce Springsteen, LL Cool J…all captured in ways that made music photography into art.

Some of Corbijn’s music videos are counted as the best in the world, ever, and his films are highly loved and respected. Anyone watching Corbijn’s debut film Control, an astonishing portrait of Ian Curtis of British cult band Joy Division, will never forget it.

The exhibition presents material from Corbijn’s enormous archive of his work in the music industry from the early 1970’s until today.

It’s a great honour for us at Fotografiska to present the exhibition 1-2-3-4 consisting of more than 400 photographs and display cases. Anton Corbijn has visualized and shaped popular music for the past 40 years. For many of us, his role in the music industry is as important as the musicians in front of his camera. He came closer to them than anyone else. We have a strong relationship with Anton Corbijn since his previous exhibition at Fotografiska, Inwards and Onwards in 2012, and we are very proud to present this comprehensive overview of the work that made him as famous as the artists he portrayed. The fact that he from now on will focus more on his film work than photography, brings further light to the fact that these portraits are part of an era now gone, says Pauline Benthede, Exhibition Manager at Fotografiska.

With some bands, like U2 and Depeche Mode, Anton Corbijn was the creative director behind the bands visual output. Corbijn took all their promotion pictures and sleeve photographs for decades, directed their music videos and for Depeche Mode he even designed their stage sets since 1993. Some of those expressions are symbols of our times.

- Starting as a young, shy boy I was initially impressed by musicians, even on a local level. But very quickly I realised that I wanted to take pictures of people who, like me, have a feeling that what they create is the most important thing in their lives. It’s never about fame, and it does not matter if they express themselves with music, film, paintings... It’s about people who give everything. When I see that, I want to take a portrait of the person.

Corbijn is famous not only for his captivating photography; he is also well-known for building long relationships with some of the bands he portrays. Corbijn is often counted as the invisible member of both Depeche Mode and U2, and his part in their success cannot be undermined.

- Yes, sometimes it turns into long collaborations like with those two bands neither of which I initially liked so it was a slow, but wonderful and organic process. Another is Metallica, who I actually first said no to when they contacted me after U2’s record ACHTUNG BABY, telling me they wanted to ‘do a change’. I thought, what can I do with four guys in black t-shirts that hasn’t been done before? But later, after I changed my mind and said I could try to take pictures of them during one day, they became one of the groups I worked with for a very long time.

Corbijn says there is no formula of how to earn people’s trust or form new friendships, and he doesn’t see it as an intellectual process. It’s intuitive.
1-2-3-4 is not a “Best Of”-collection. These pictures are chosen because they are timeless.

- I realized that I had so many negatives in my drawers, pictures that no one has ever seen and because no one has seen them, they ‘don’t exist’. The ones I picked for this exhibition have that certain timeless aspect, and they vary quite a lot from the ones that were chosen for the albums or for promotion. Other images are more well known but they didn’t appear in my retrospectives so far. So for instance there is no Joshua Tree cover photo but there are is an outtake of that shoot.

Welcome to Fotografiska to experience the photographs that helped shape the image of the modern music industry.

Photographic exhibitions are the foundation of Fotografiska, an international meeting place. Since our grand opening on May 20th in 2010, we have exhibited legends like Annie Leibovitz, David LaChapelle and Nick Brandt, and also introduced previously unexhibited photographers. More the 25 exhibitions every year guarantee new experiences of interesting photography for our guests.

”Photography is the technology to capture life. We support and provide life worth capturing.” For example the restaurant and bar at Fotografiska is famous for combining focus on sustainability with pure pleasure. 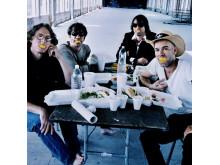 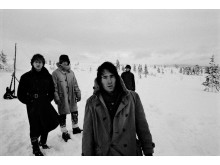 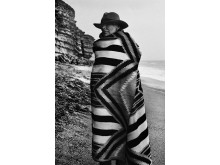 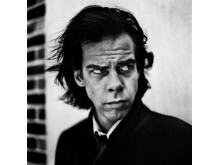 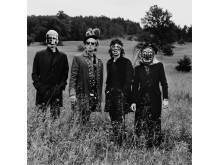